My eye-opening experience with stroke, by William

I learned that stroke could happen to anyone at any time, but I also learned how to use my stroke to see the world around me from a different perspective.


I had my stroke in March 2007, when I was 29 years old. I was living in New York at the time and was at a dinner party with friends when it happened. I could suddenly feel my left eye drifting to the side. It was a very unpleasant sensation, as if someone had grabbed my eyeball and was trying to rip it out of my face. The sounds around me were muffled, the walls began rotating as my body remained still. My friends thought I was suffering a severe migraine as I also began vomiting. My wife came to my aid and couldn’t see the pupil of my eye. She knew I needed to get to hospital quickly.


That night, New York was experiencing a blizzard, so I was unable to get an ambulance. I was basically carried to the hospital through the streets. Doctors put me through every single test in the book. Spinal taps, angiograms... you name it, if it existed, I had it. The area of my brain where the stroke occurred was so small that doctors didn’t find it straight away, but in the short-term it had paralyzed my eye. They kept me in for a week to monitor me before I was discharged.


Adjusting to life after my stroke was quite a challenge with my vision impairment. I was left with partial blindness which caused a disconnect with my brain processing the space around me. I couldn’t see the full space and this meant I had to regain my balance and learn to walk again. I was living in an apartment building, which meant I had to attempt to walk up and down three flights of stairs on a regular basis, but as time passed, I grew more confident and took it in my stride, determined to overcome such hurdles in my recovery. 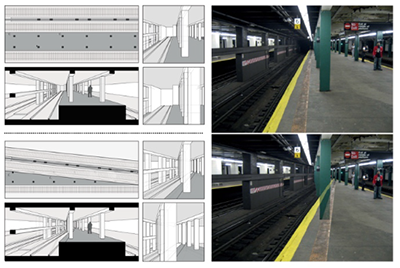 I am an architect, so vision is a key tool for me.  During my recovery I found that one of the ways to keep occupied was to document and journal my notions of perception, to visually  communicate to others how I now saw the world around me. This was mainly through photographing spaces and sketching them to show how I saw them compared to how someone with unaltered vision would. Through these visuals, I’ve been able to effectively communicate my thoughts, feelings and experiences, adapting those notions of perception into my current work. Not only did this work help people understand what I was going through, it was a great way to keep my skills in practice and refocus myself after my stroke. I created about 200 collages in the space of a year. I guess you could say that my stroke was quite the ‘eye-opening’ experience.

My family and friends have played a huge role in supporting me throughout my stroke. Despite experiencing a second stroke in 2013, a few years after moving to Australia, my determination and drive for my work has never been stronger.