Written by the Mob for the Mob

A book of personal stroke stories from Aboriginal community members is proving effective at getting authentic, relatable information across to others in the community and raising stroke awareness.

All the words in Stroke: Written by the Mob for the Mob come from the Aboriginal people of the Kamilaroi/Gomeroi/Gamilaraay/Gamilaroi nations. The booklet was published by the Hunter New England Local Health District of NSW. 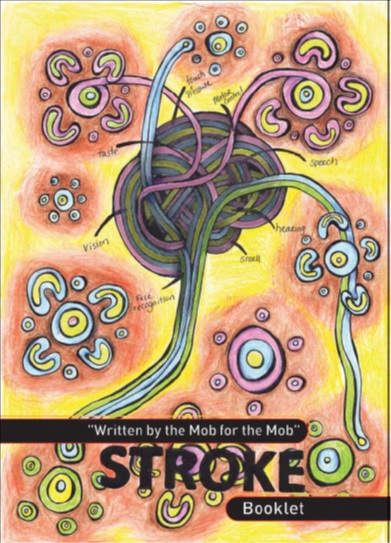 “It’s very important that it belongs to the local community,” says Rachel Peake, Stroke Care Coordinator in from Hunter New England Health. “And the community chose the stories, artwork and analogies that would be best to make it work.”

The stories were gathered through a series of yarning sessions, which let people direct the conversation themselves. This makes sure that nothing important is missed, and that the authentic voices of the participants come through.

The result is a relaxed mix of humour and art. This includes the painting on the booklet’s cover, a representation of stroke and the brain created by students from the Peel High School. This picture also demonstrates the analogy of the river, which is central to the booklet’s message.

“The river is compared to the blood flow through the body,” says Rachel. “If it’s dammed with silt and trees then nothing gets past, like when an artery gets blocked. Or if the river floods it kills the land it goes over, which can be like a bleed in the brain.”

Since its publication the booklet has taken on a life of its own, with hardly any copies left from the original print run of 2000. This is partly due to people’s pride in their own family members, demonstrating that the booklet is reaching the community it was created for.

As Rachel says, “This is the message the community wanted: if they’re given a voice, they can educate their own people.”

You can find the Stroke: Written by the Mob for the Mob booklet on enableme and InformMe, as well as a series of videos of respected community members telling their own stories.

Download Stroke: Written by the Mob for the Mob (PDF, 12 MB)