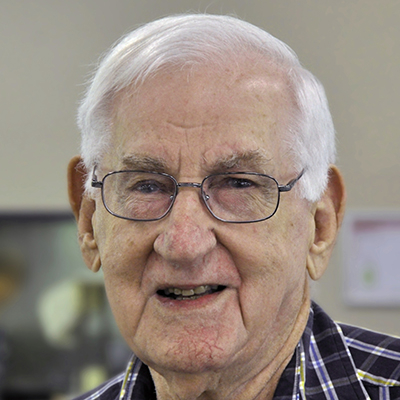 My name is Lewis Hoffman and I was a Pharmacist for 50 years, retiring in 2005.

Valentine's Day 2009 turned out to be the worst day of my life. My partner Jill and I had just sat down after dinner to relax and watch TV when I had a bit of indigestion. This was a problem that had been niggling since we went on a world trip the year before. I reported the problem to my GP on my return from the trip and he said we would investigate if it got worse. I stood up to get an antacid tablet for the indigestion and that’s when it all happened. My legs gave way, and as I was falling, I told Jill to ring triple zero (000) because I was having a stroke.

Fortunately, we have an ambulance station nearby and the paramedics came quickly.  I arrived at hospital within the hour. Jill told the waiting neurologist what had happened. She quickly diagnosed the stroke, but also believed I had an ulcer which was about to burst. A gastroscopy made the diagnosis official the next day, although I was assured it had nothing to do with my stroke. I was then admitted and taken to the ward.

I had lost my sight and speech, I was paralysed down my right side and I was very scared and emotional. My therapy started the next day. With the help of a wonderful nursing team, a physiotherapist, two physio students and a speech therapist I was determined this was not going to beat me and I was going to recover.

After spending a month in hospital with my eyesight semi-returning I was discharged and sent to a rehabilitation hospital for further treatment. My eyesight came back along with my speech thanks to another wonderful speech therapist and hours of mouth exercises. My right arm became stronger with the help of an occupational therapist. However, my ability to walk needed a lot more attention. The process included a daily visit to the gym, and helped by the physio team, I was initially supported with a walker, then with a crutch and finally with a walking stick.  When I was discharged, I was urged to attend hydrotherapy and walk and exercise in the water. I did this twice a week for three years with great success. A social worker arranged for rails to be fitted at my home to make me safe. It amazed me as to what home assistance was available.

Before I was discharged, from hospital I asked the nurse/manager if I could come back as a volunteer in her ward (the neurological ward) once I had spent a bit more time recovering. I wished I could have spoken to a survivor when I was a patient – someone who knew what I was going through and who could assure me there was light at the end of the tunnel if I was prepared to do the hard work.

In 2014 I returned to the hospital triumphantly and spent the last seven years sharing my story with the patients and listening to how they were feeling. I hope my support lifted their spirits and inspired them to never give up.

After being given the all clear by my neurologist to start driving again, I became a Stroke Foundation StrokeSafe Ambassador. As part of this program, I spread the word on how to prevent stroke and learn how to recognise a stroke. I find it very rewarding to stand in front of an audience and share my story to help people get a better understanding.

I hope through education we can reduce the burden of stroke on individuals and their loved ones in the future.

I am now living a normal life now, but still have a slight limp in my right leg.