How many repetitions are needed to reach recovery goals post-stroke?

When attempting to learn a new skill, or improve an old one, people often ask – how much practice do I need to do in order to reach my goal? This very same question may be asked by a stroke survivor who wants, for example, to improve their walking ability, or retrain the use of their arm. Unfortunately, the answer is that we don’t really know how much practice is needed to do to improve performance. One thing we do know is that time spent in practice is a very poor measure of how much actual work has been completed. For example, one study of people in rehabilitation (Scrivener et al 2011) found that during a 30 minute block, one person completed three repetitions of practice and another person did 397! As such, this article will concentrate on numbers of repetitions rather than time, as it is a far more accurate way of quantifying how much practice has really been done. So the question then becomes – how many repetitions (reps) are needed to reach recovery goals post-stroke?

How many reps to get neural plasticity in animals

In order to achieve changes in skill, changes need to happen in the brain. After a stroke, this may mean needing to form completely new pathways, as some pathways may have been lost due to the damage caused by the stroke. Neural plasticity, also known as brain plasticity and neuroplasticity, is this ability of the brain to change throughout an individual's life time.

In studies looking at rats and monkeys, around 400-600 reps per day were required to change their brain and achieve significant changes in their hand function – also known as achieving neural plasticity (Kleim et al 1998, Nudo et al 1996a). When the monkey subjects of a similar study had had a stroke (Nudo et al 1996b), they needed to do the upper end of this range i.e. roughly 600 reps a day for 30 days to achieve neural plasticity and return of hand function. 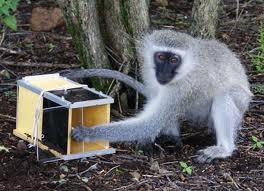 A study of neural plasticity in stroke survivors

A study of stroke survivors with right arm weakness (Carey et al 2002) asked subjects to practice moving their right index finger to follow a target on a screen and then perform the same movement in an MRI scanner. After the training, there was clear evidence of neural plasticity, as there were areas of the brain being activated that had been completely silent before the training. Further, many of these new areas of activation were near the site of the stroke, so it appeared that new pathways had started activating around the area of damage. This was accompanied by improved co-ordination of the movements of the right index finger.

So, how many reps did this take? The stroke survivors did 1200 one-minute trials, which, calculated out, is approximately 6000 to 7000 finger movements. Time-wise, this worked out to around 60 minute sessions every day for 20 days. 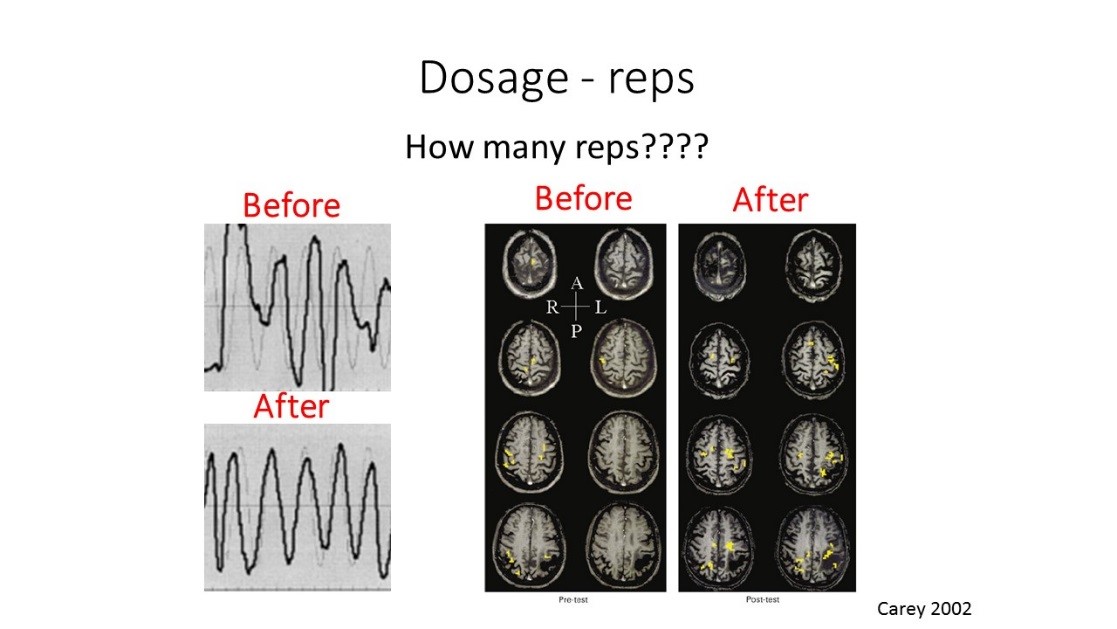 Above: On the left you can see the finger tracing pattern (in bold) of one of the stroke survivors in the study. The Before picture shows that they have difficulty following the trace on the screen. In the After picture they are much more accurate. The scans on the right show the changes in their brain activation before and after the training. On the bottom left on the images you can see the site of the stroke (the black area, which is most clear in the bottom right hand images). It is evident that there is more brain activation (the yellow highlighted area) after the training and that some of this new activation is now near the damaged area of the brain.

A study of improved sitting balance in stroke survivors

In two further studies, stroke survivors improved their balance in sitting by doing repetitive reaching beyond their arms’ length to do different tasks (Dean et al 1997, 2007). After two weeks of training, they could put more weight on their affected leg, they were switching on more muscles, they could reach further and faster than before, and were able to place more weight on their affected leg when standing up. They had done 300 reps a day (3000 reps in total), but time-wise it was less than 60 minutes per day for two weeks. 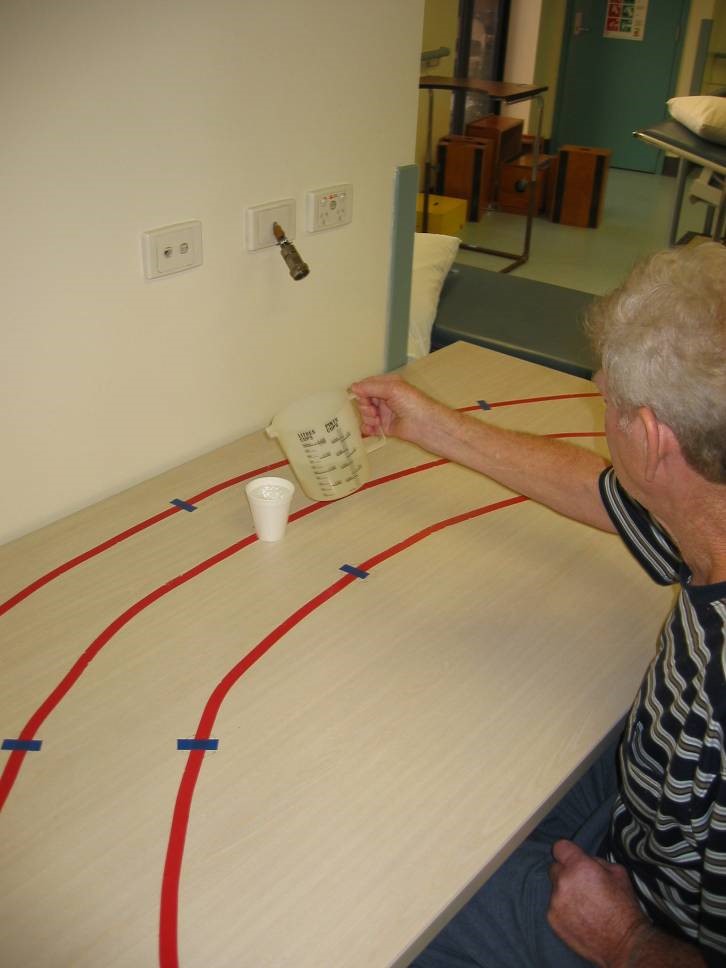 This study (Barker 2008) used a SMART arm device that allowed people with an extremely weak arm to move their arm forwards towards a target. People doing this practice ended up with improved arm strength and movement. They had done approximately 800 reps across 12 sessions. 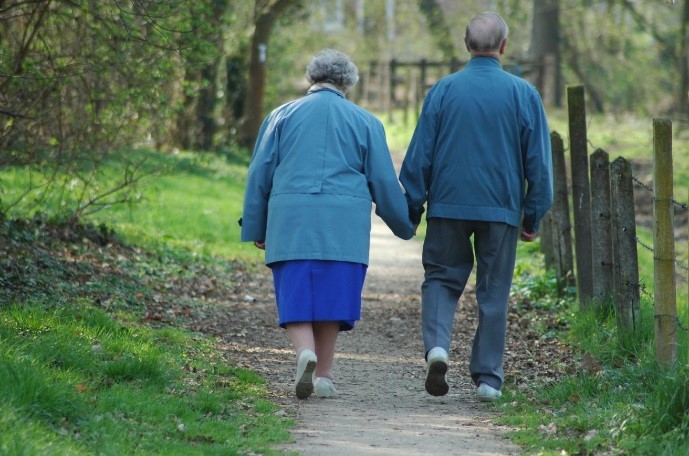 While we don’t know how many reps of practice need to be done to improve your skill at doing something, evidence suggests the number is large. Simply put, you probably need to do hundreds of repetitions of practice to see significant changes in skill. Counting and recording your reps of practice is a good way to monitor how much you are doing and encourage you to increase your amounts of practice.

A physiotherapist can help you design a program suited to your ability, needs and goals. To find a physiotherapist in your area, head to https://choose.physio/findaphysio, or for a dedicated vestibular physio, contact the Australian Physiotherapy Association at info@australian.physio. 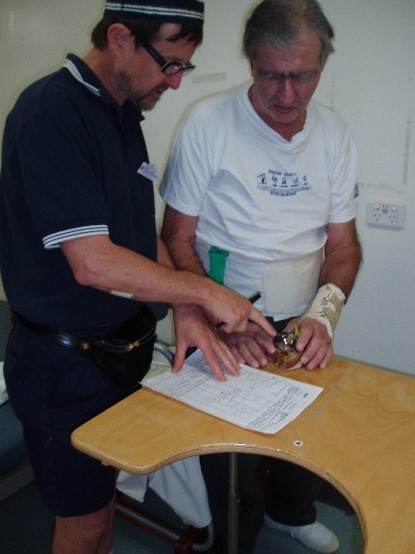 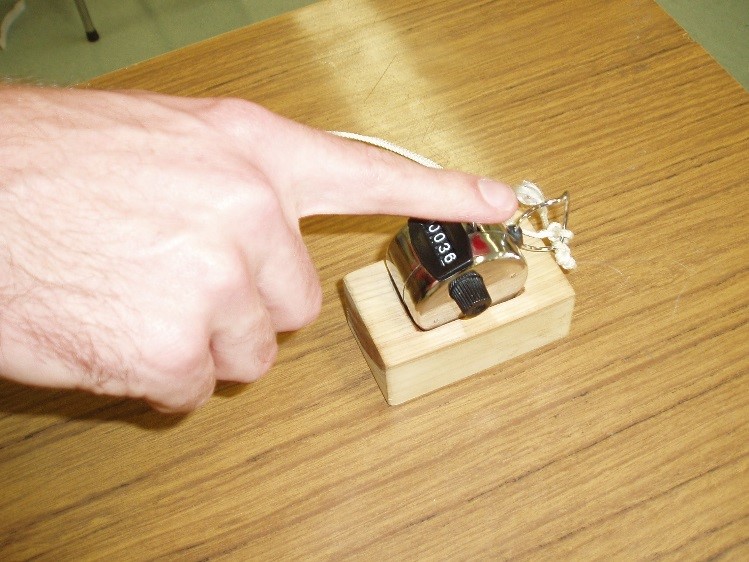 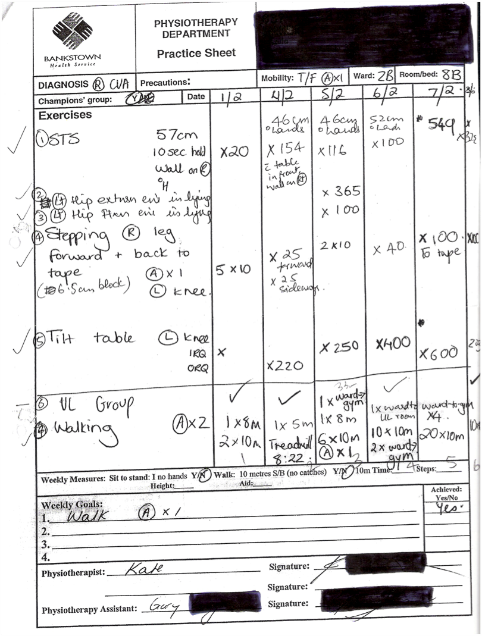 Dean CM, Channon EF, Hall JM. Sitting training early after stroke improves sitting ability and quality and carries over to standing up but not to walking: a randomised controlled trial. Australian Journal of Physiotherapy 2007;53:97-102.