Strokes mainly happen in one of two ways. Either there is a blood clot or plaque that blocks an artery in the brain, or a blood vessel in the brain breaks, causing a bleed in the brain. This stops blood from getting through, stopping the delivery of oxygen and nutrients. 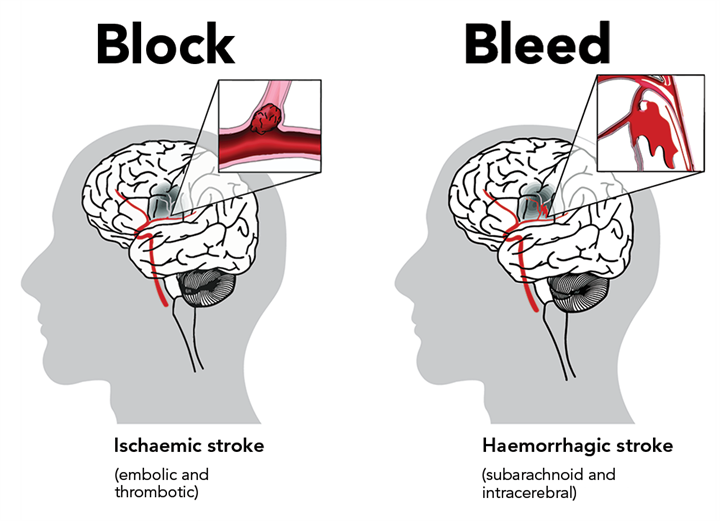 If a blood clots forms somewhere in the body, it can travel through the bloodstream to the brain. Once in the brain, the clot travels to a blood vessel that’s too small for it to pass through. It gets stuck there and stops blood from getting through.

As the blood flows through the arteries, it may leave behind cholesterol-laden plaques that stick to the inner wall of the artery. Over time, these plaques can increase in size and narrow or block the artery and stop blood getting through.

A transient ischaemic attack (TIA) is sometimes known as a "mini-stroke". The signs are the same as those of a stroke, but unlike stroke, they only last a short time. The signs may disappear in a few minutes and last no longer than 24 hours. They are often a warning sign that a stroke may occur.

Bleed in the brain

A stroke caused by a break in the wall of a blood vessel in the brain is called a haemorrhagic stroke. The break causes blood to leak into the brain, stopping the delivery of oxygen and nutrients.

Haemorrhagic stroke can be caused by a number of disorders which affect the blood vessels, including long-standing high blood pressure and cerebral aneurysms.

An aneurysm is a weak or thin spot on a blood vessel wall. The weak spots that cause aneurysms are usually present at birth. Aneurysms develop over a number of years and usually don’t cause detectable problems until they break.

An arteriovenous malformation (AVM) is a tangled mass of blood vessels. An AVM is usually present at birth. If the AVM is located in the brain and the blood vessel walls burst then a haemorrhagic stroke will occur.

There are two kinds of stroke.

Both kinds of stroke stop blood getting to parts of the brain.

In the 1st kind, an artery in the brain gets blocked.

In the 2nd kind, a blood vessel in the brain breaks, causing bleeding.

A stroke caused by a blockage is called an ischaemic stroke.

The blockage can be caused by a blood clot getting stuck in a blood vessel in the neck or the brain.

It can also be caused when blood vessels become blocked with plaque.

Bleeding in the brain

A stroke caused by a blood vessel bursting in the brain is called a haemorrhagic stroke.

The burst vessel stops oxygen getting to parts of the brain.

This kind of stroke can be caused by high blood pressure.

It can also be caused by a weak spot in a blood vessel.

This is called an aneurysm.

Sometimes signs of a stroke only last a short time.

This is called a transient ischaemic attack (TIA).

A mini-stroke is a warning sign a stroke may occur in the future.

Sorry there are no resources for this topic